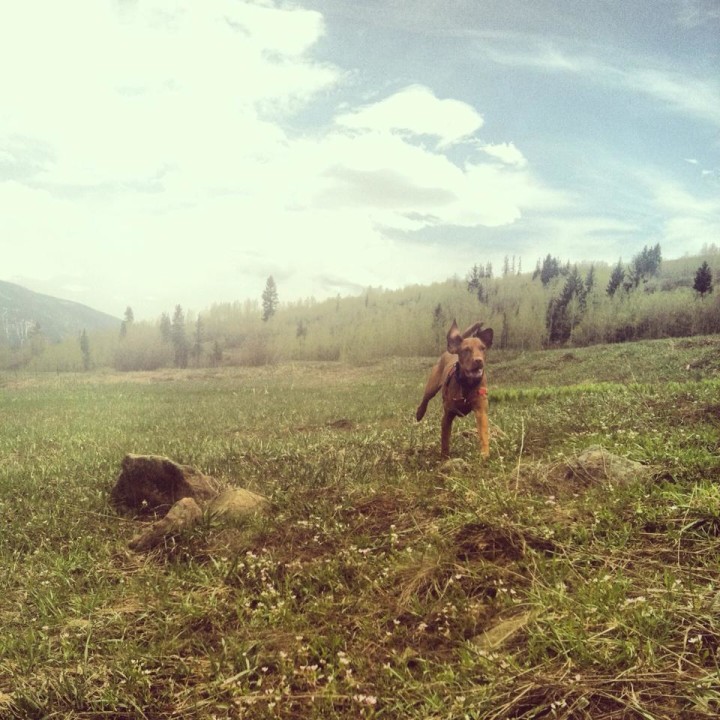 Ahh, it’s really starting to feel like summer. I got back in town  recently after being gone for nearly three weeks and I was so delighted to hear and see the hummingbirds buzzing about. The last few days have been warmer with loads of sunshine, and everyone seems to just sense that summer is right upon us.  Abe and I took a hike today and he was thrilled to jump in and over streams of snow melt coming down the mountain. This will be his first time experiencing summer and I love watching his face take it all in.  The Frisco Whole Foods recently opened and as a result we ended up with more blueberries than we’ll be able to eat over the next few days. Hence, blueberry cake bars. [...] 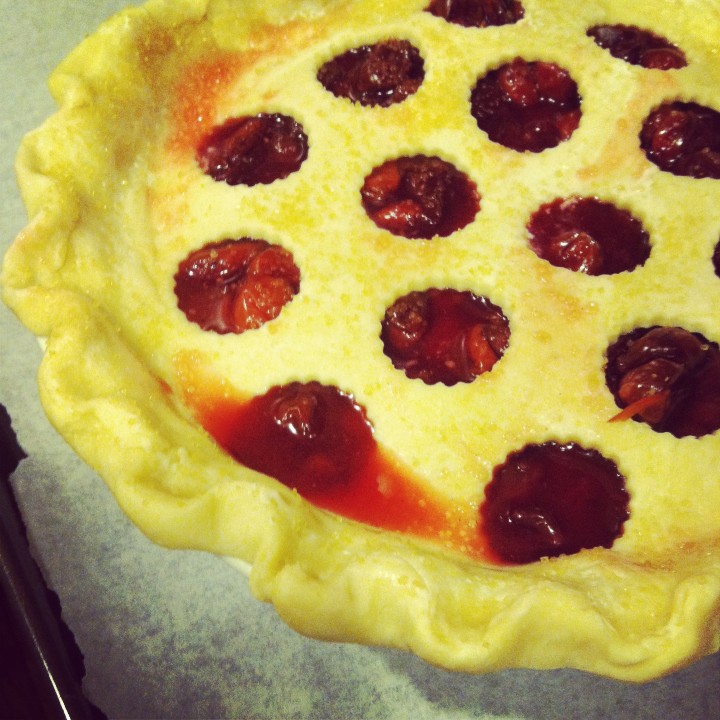 Greetings, all.  I made this pie two weeks ago, right before leaving town. Unfortunately I was only able to enjoy one piece, while Zack was left to finish the remainder. I hear it only lasted two days.  We bought bags of pitted sour cherries from a fruit stand in Palisade last summer, then tucked them back into the depths of the freezer. I’ve been rationing them in a way; each time I feel the urge to bake something with fruit I consider my sour cherries and decide if the recipe is worthy of them. I did use some for the Sour Cherry Slab Pie back in August, which, was amazing. But this time I wanted a deep pie, one that was more traditional and packed with fruit. A little recipe [...]

I can’t stop baking these. I’ve already planned to make them again in 2 1/2 weeks  so we can eat them for breakfast on Christmas morning. They remind me of my days as a student at The French Pastry School, when obviously, pastries were plentiful.  Flaky, tender, and feather-light, homemade ‘quick’ puff pastry serves as the base for these tartlets. Then they’re topped with ripe, yet slightly firm pears, and baked. Golden brown and fresh out of the oven, a lightly spiced powdered sugar glaze is drizzled over the tops, creating warm, sweet, fruity, flaky pastry goodness.  I made this dough and used it over several days. Each morning I’d roll out two or three squares and bake them off so we had fresh pastries with our coffee. Because they’re [...] 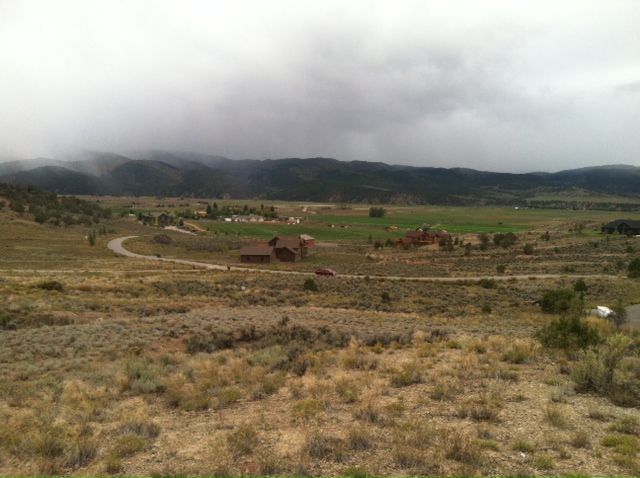 On Thursday, there was plenty of sunshine but my, was it windy. You could just tell a weather system was on its way. Friday morning we awoke to snow again on the high peaks and ski runs. It was gray, overcast, and spitting a chilly alternating mix of snow and rain throughout the morning. Zack and I drove down valley, where we’ve been looking at some real estate. While we were down there, we could see more weather coming in from the west. By the time we were back in Vail and unloading the truck, it was snowing. Big, fat, white snowflakes. And as the evening wore on, they started sticking to the grass. Oh, mountain living. I decided to make our house as cozy as possible and began a [...]

May feels good, doesn’t it? The mountain is closed, the sun is shining, and bit by bit, the grass is turning greener. In a few weeks the aspen trees will also start to open their tiny leaves. I’m looking forward to summer in the valley, and I always do. Yesterday evening I noticed something out of place in my backyard. A second look confirmed my surprise- two HUGE moose grazing! It was that time of day when it’s light out but too dark to get a clear photo, so unfortunately I have nothing to show for it. But it was pretty neat and I enjoyed watching them. I grew up in the midwest, so moose and other mountain wildlife sightings get me more excited than most. There’s just something so [...]

August sure has a way of sneaking up on you. Before you know it, the month is halfway over. But late summer is wonderful. I have been soaking up the lush green mountainside, the cheerful hummingbirds who visit my feeder 100+ times a day, and the nights when I don’t need a light jacket. For these too shall pass as the season evolves into Autumn. I have been so busy making pastries and my Honest “Twinkies” that there hasn’t been too much downtime in the kitchen. When my baking work is finished, I want to get outdoors and play. Like I’ve probably said a million times, summer is my absolute favorite season in the Rockies. With views like these to distract me, can you really blame me? Next week we [...]

Sigh. Is there anything sweeter than a fruit pie? Flaky, crimped pastry. Bubbly, baked fruit filling. Memories and comfort. I love baking pies because I find them very relaxing. They break the norm for me from plated desserts or complex pastries because they don’t need accompaniments and garnishes, or multiple steps; they are wonderful as is. Pastry and fruit. A simple slice, and that’s all. In my opinion, an honest pie should have a homemade look to it, so perfection is not important. Honest pies aren’t production pies. They are hand-crafted. Someone lovingly picked through and cut the fruit. That same person pinched the dough between his or her forefinger and thumb to create a fluted crust. An honest pie is also a very proud pie that forever holds memories [...]

Last summer I created a plated dessert one night that involved chocolate profiteroles, honey ice cream, and roasted apricots. It was a pain because during service the freezer broke, and the honey ice cream was melting like crazy. Each mini profiterole had to be scooped and assembled to order, which took time, and that ice cream wasn’t getting any colder. It felt like that night would never end. But, I do remember that dessert fondly because there truly is something special about the flavors of chocolate, honey, and fruit coming together in one bite. Honey is such an incredible ingredient and as a pastry chef; a valued friend. I can’t even begin to count how many times honey has come to the rescue as the garnish for a plate or [...]

A long time ago, we used to eat at Arby’s. Having the sweet tooth that I do, I always wanted to get a turnover. They were sitting in plain sight, under the heat lamp, just begging to be sold. It was always a struggle to win over my mom and convince her that getting me a turnover was a GRAND idea. Now I suppose I see why she was so reluctant. They weren’t anything that special, being a fast food turnover. Nobody lovingly made them from scratch with a homemade fruit filling. But when it comes down to it, I think turnovers are just plain adorable. Look at one and tell me you disagree. We don’t see so many turnovers these days, which is why they’re a fun treat to [...]

Ahh, summer. They say you come for a winter out here, experience a summer, and then never leave. Hard to argue. This is my favorite time of year and I try to soak it up as much as I can. I feel particularly blessed going into this summer season with more creative freedom than I have ever had in my life. A chance to finally work on all of those business ideas I’ve always had and chase those dreams. It’s important to work hard and earn your way in the world. But to some extent as well, life should feel full, happy, and lived. I have been out in Colorado for almost three years. Until recently, my entire Colorado time has been spent working non-stop in restaurants. And I had [...]